Teenage Mutant Ninja Turtles has been a staple of many comic book fans since the first comics in 1984. The first animated television series, designed for children, dropped three years later in 1987. In 1990, the first film was released as Teenage Mutant Ninja Turtles, and then in 1991 came a sequel, Secret of the Ooze. Finally, in 1993, came the third film. There was also the short-lived series The Last Mutation. There have been many animated television shows, including 2003, 2012, and 2018 series. Then we have the 2007 CGI film, the 2014 and 2016 movies and the 2022 film, the film continuation of the 2018 series. There is also the upcoming Mutant Mayhem film coming in August 2023. But what does this have to do with The Last Ronin?

Without the endless streams of comics from different publishers and the screen media, The Last Ronin wouldn’t be a publishing success. So, what is the story about? First, let’s jump into the New York Sewers as we explore The Last Ronin.

When The Last Ronin Came To Be

According to the Turtlepedia entry on The Last Ronin, the IDW Publishing series started dropping issues in late October 2020. The follow-up, entitled The Lost Years, started dropping in late 2022 or sometime in early 2023.

Set in the future, the five-part series focuses on the sole surviving turtle, Michelangelo. He seeks a path without his brothers, father Splinter, and friend Casey Jones in his quest to avenge their deaths. His goal? Take out the second Shredder, Oroku Hiroto, the son of Karai and grandson of Saki.

The Deaths Of The Hamato Clan

One of the most significant aspects of Michelangelo’s journey is the loss of his three older brothers and their father. He constantly sees the ghosts of Leonardo, Raphael and Donatello, who advise him as he goes on his journey.

Losing his brothers fuels Mikey’s desire to act on his vendetta against Hiroto. At one point, he’s thrown out of a building and hits the pavement so hard it almost kills him. He manages to get down into the sewers and to the lair he once shared with his family and tries to kill himself, but he blacks out and is rescued by April O’Neil, a longtime friend of the Hamato clan.

Raphael is stabbed in the throat during a fight with Karai.

Leonardo dies in an explosion.

Donatello and Splinter die in an ambush while trying to call for peace between the warring factions in Japan.

Michelangelo dies in the final issue from his injuries and has Casey Marie Jones at his side as he expires.

The Tragedy Of The Joneses

April O’Neil and her daughter Casey Marie Jones play a significant part in the Last Ronin story. During the years of fighting, April is severely crippled, having lost part of her left arm and part of her right leg.

Before the war with the Splinter 2.0. escalated, April and Casey Jones became engaged and later married. She later fell pregnant with their daughter, Casey Marie. However, tragedy struck when the elder Casey was killed alongside Leonardo before Casey Marie’s birth.

When Hiroto took over New York, April and Casey Marie were forced to hide. April took the deaths of the Turtles and Splinter incredibly hard as they were part of her and elder Casey’s lives for so long that they were part of their family.

As her daughter grew up, April had to play the role of both parents to Casey Marie.

Upon finding Mikey about to kill himself, April introduces her longtime friend and daughter. Casey Marie isn’t at all freaked out because she has heard all the stories about the turtles from her mother. Mikey becomes accustomed to Casey Marie and reluctantly takes her on as a student. However, he also realises that there’s something special about her because her parents have been around the turtles most of their lives.

Casey Marie shares a lot of her appearance with her father, Casey. She takes up the sword as a weapon. Upon Mikey’s death, she begins raising three infant turtles.

The Last Ronin shakes up the Foot clan, with their leadership being overseen by Oroku Hiroto, the grandson of the original Shredder, Oroku Saki. This makes him the son of Karai. Mikey mentions throughout the story that Hiroto is the “bastard” son of Karai and that he blames him for the deaths of his brothers.

It’s unknown if Hiroto is Karai’s illegitimate son or if “bastard” is just Mikey’s insult towards him due to his crimes. If anything, he could be far worse than his grandfather was.

The Future Of The Turtles

Despite the deaths of the original turtles, Casey Marie at the end of the fifth issue is seen feeding four infant turtles as a hint of what is to come. This story will lead into the sequel series, The Last Ronin: The Lost Years which will show what was going on in the past with the other turtles and Mikey in the time that wasn’t covered in the original Last Ronin story.

It will also cover Casey Marie raising and training the new turtles. Finally, it is unclear when the Lost Years will be out. The release date for the first issue keeps changing. 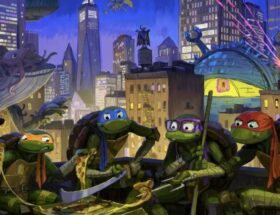 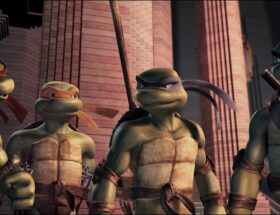