Never mess with a mother in Westeros. The following season of House of the Dragon won’t drop until 2024. Still, we can only speculate what is coming for Rhaenyra Targaryen, her uncle-husband Daemon, and their allies in Season 2. We will also be jumping back and forth between Team Black and Team Green as we’ll bring up Alicent Hightower’s side of the conflict.

In this post, we’ll be going over what we expect to happen in the next season of HotD, judging by what has come out in the media. We will be making this post as having spoilers as we will be diving into things from the book Fire & Blood, on which the series is based.

Rhaenyra And The Aftermath Of Lucerys’ Death

The death of her middle son, Lucerys, hits Rhaenyra incredibly hard when Daemon gives her the news at the end of Season 1. While the moment is about sixty seconds of silence, it is effective enough to give us a clue about how the story will play out in Season 2.

Rhaenyra adores her sons; losing any of them would break her heart. In the book Fire & Blood, which the series is based on, Luke was purposefully killed by Aemond Targaryen, his uncle and Rhaenyra’s half-brother. In the series, however, his death was an accident after Arrax and Vhagar become uncontrollable during a rainstorm, leading the enormous dragon [Vhagar] to kill her much smaller fellow dragon [Arrax], prompting the princeling to fall to his death. Or be eaten by Vhagar.

In House of the Dragon, Aemond is horrified by what has happened, knowing it will only lead to further bloodshed between the sides championed by his mother and half-sister. However, the book depicts the opposite reaction.

Also, it has said too, according to Luke’s Game of Thrones Wiki page (linked above), there were numerous depictions in Fire & Blood of how Lucerys died. The story is told from the perspective of Mushroom, a storyteller known for telling tales full of inaccuracies.

Going After Alicent And Aegon

The dynamic between Rhaenyra and her former best friend turned stepmother, Alicent isn’t what it once was. The loss of Luke at Aemond’s hand will only make the situation a thousand times worse. Regardless of whether Luke’s death was an accident, Rhaenyra already blames the Greens for the stillborn death of her daughter Visenya due to the stress of discovering Rhaenyra’s father, Viserys’ death.

Daemon already came to the thought that his brother may have been poisoned. It has already been made clear that Rhaenyra doesn’t think highly of her brother, Aegon, and may have purposefully called one of her sons with Daemon, Aegon, to take the piss out of Alicent.

Rhaenyra also doesn’t enjoy that Alicent allowed her Aegon to take the throne from her. Not to mention, the Queen Dowager misinterpreted the Song of Ice and Fire prophecy, thinking that Viserys was talking about their son Aegon when he was talking about his eldest daughter. So Alicent had better be prepared to add “a son lost” to the list of blames Rhaenyra has in her mind.

The Reactions Of Jace, Joff, Rhaena And Baela

Luke and his older brother Jace were incredibly close. Even more so, they were close to their cousins/stepsisters, Rhaena and Baela, who became their betrothed. There was a deep affection between the four of them. Jace was betrothed to Rhaena, the eldest of Daemon’s daughters and Luke was engaged to Baela, Rhaena’s younger sister.

Jace and Luke were not their uncles, Aegon and Aemond, who would sleep with any woman that caught their attention. Moreover, the girls were cousins to Aegon, Aemond and Rhaenyra, as their father was Viserys, Daemon’s brother. The family dynamics in Westeros are thrown out the window (not a reference to Bran Stark’s unfortunate incident in Game of Thrones), with the brothers and sisters who are married to each other and whatever else.

Rhaenyra raised her sons to be gentlemen. They were kind to every woman they met. Jace even danced with his aunt Helaena at the final family dinner, attended by Viserys. Seeing the kids mourn their brother is going to be hard to watch, knowing how close they all were.

Let’s jump over the Greens for a moment, and Alicent will be livid when she finds out what happened between Aemond and Lucerys. Or will she? The Queen Dowager and Rhaenyra were beginning to repair their relationship, or so it looked, before Viserys’ death. However, with Luke dead and Aemond responsible, it will be interesting to see how Alicent reacts.

Is Alicent extreme at times? Yes, and we thank her father, Otto, for shaping her into his puppet. He’s also the reason why the Dance of the Dragons is happening. The biggest question is whether Alicent will be sympathetic towards Rhaenyra due to the loss of her son. Or will she be cold and say it wasn’t Aemond’s fault? It’s anyone’s guess.

It’s not a secret that the eldest of Rhaenyra’s younger half-brothers, Aegon, is a nasty piece of work. He’s spoilt and arrogant and will do anything to get away with everything he has done wrong. However, he isn’t punished because he has supporters who will do anything to ensure he succeeds.

Aegon will also sleep with every woman he can get his grubby hands on, even if it is by force. Alicent is disgusted by his behaviour, but there is little she can do to stop him. Towards the end of Season 1, we learn that Aegon is fathering bastards so they can be placed into fighting rings like feral dogs.

Though Season 2 will show him in the throes of being king, a position he didn’t even want, it will also highlight how he is a husband and father. His sister-wife, Helaena, referred to this last season when she tells Baela and Rhaena that most husbands ignore their wives.

There is every chance that Aegon will continue what he is doing regarding fathering bastard children. However, we’re wondering what his legacy will become and how his grandsire, Otto, factors into this.

For our final part, we wanted to talk about some of the characters who will be introduced during House of the Dragon Season 2. Before we go into this, we must stress that we don’t know the roles these characters will play in the show yet.

So, let’s start with one we know is more than likely happening; Blood and Cheese.

In Fire & Blood, Blood and Cheese come into the story after Aemond kills Luke. Upon learning of his stepson’s demise, Daemon decides to get revenge by using the analogy, “A son for a son.” However, instead of focusing his energy on blaming Aemond, Daemon sets his sights on Aegon.

Knowing he cannot get an army to target the Greens’ king, he goes to Mysaria, his spymaster and his former lover, who hires two lowly assassins known only as Blood and Cheese. The pair sneak into King’s Landing, thanks to Cheese’s knowledge of the tunnels. Knowing that Helaena took her children, Jaehaerys, Jaehaera, and Maelor, to visit Alicent every evening, the pair hid in Alicent’s room, killing the maid so she couldn’t expose them to the Queen Dowager, whom they imprisoned.

When Helaena arrived at her mother’s room with the children, her guard was killed, the door was blocked, and Blood and Cheese forced her to choose which of her sons should die to avenge Luke. Frantic, Helaena begged them to take her life. But, instead, the assassins tell her that if she doesn’t choose a son to die, they will do unspeakable things to her daughter, Jaehaera, and then all three children will be killed.

With her back against the wall, Helaena chooses the youngest, Maelor. The pair then tell Maelor, only two years old, that his mother chose him to die. Instead, the pair kill the heir to the throne, Jaehaerys, taking his head back to prove they did the job. Maelor becomes the heir to the throne, but Helaena cannot look at him. Jaehaera is left traumatised, having watched her twin brother be slain. Her son’s death is a catalyst for Helaena to commit suicide. This prompts people to riot against Rhaenyra.

Confirmation That Blood & Cheese Will Happen

The Blood and Cheese aspect of the story will play out in Season 2, as writer Sara Hess said in an interview, per Collider, that they are writing the storyline into the season. However, she stated that it “will not disappoint.”

Causal fans might not be aware that Viserys and Alicent have four children, not just the three we became accustomed to during Season 1. The youngest is Daeron, who was living in Oldtown during the season. A hint to Daeron’s existence can be seen in the opening credit sequence of episode six (we think) as one of the dials linked to Viserys and Alicent, depicting their children.

The final person we’ll mention is Lord Cregan Stark, who was bought up a few times last season. Jace was en route to speak to Cregan when Rhaenyra sent him and Luke to their respective destinations. 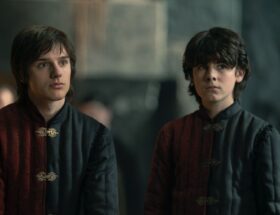