Harry hates the U.K. press. We get it, as he has said it a million and one times. It’s a neverending party of “they’re the reason my mother is dead” and whatever else he wants to spew. This includes Omid Scobie, who collaborated with Omid Scobie and Carolyn Durand on Finding Freedom, which Harry and Meghan are distancing themselves from. Harry mentions in Spare, which doesn’t refer to Scobie and Durand’s book by name, as being nonsense when the SAS training was allegedly given to Meghan is mentioned. Kudos to The Royal Grift for breaking this down. The Mail on Sunday court case proved they had something to do with the book. TRG says they’re leaving this out due to the upcoming Samantha Markle court case.

Furthermore, Harry seems ignorant of the idea that every country on the PLANET has media. Yet he’s not calling them out. He’s only taking swipes at the U.K. press because he has memories of the paparazzi swarming his mother’s car when he was a child. However, he forgets that his mother died in Paris, not in the U.K. So, why isn’t he calling out the French press? He also claims that the U.K. press hadn’t changed from the time before Diana died. Um. Yes, it has. Ibble Dibble did a whole video about this. She even found news articles from professionals who know what they’re talking about as proof.

The media has learned a lot in the days since Diana’s death. But, as Ibble Dibble points out in her video, some photos appear in the U.S. media that don’t appear in the U.K. One example we could use is the pap shots of Meghan and Archie that came out the same day as Prince Louis’s third birthday pictures.

The only publication that we remember posting the pictures was Page Six. The story didn’t make headlines in the U.K. out of respect for Prince Louis. Also, Meghan’s claims of being unable to do the school run in the U.K. due to the U.K. press have been debunked numerous times.

William and Catherine only have photos taken of their kids on their first day of school. Outside, they drop off and pick up the children without being seen by the media. When William and Harry were at school during the 80s and 90s when their mother was alive, the press stalked them.

Times have changed. So, why isn’t Harry calling out the international media? Who knows, but it could be because they haven’t done anything except call him and his wife out on their bull. All the U.K. is doing is what the other media outlets worldwide are doing.

As someone who follows the media, I know the U.K. press is not evil. But do they go overboard at times? Ah, yeah. Can they be racist, sexist and whatever else? Hell to the yes. No one denies that, but Harry blames them for everything that has gone wrong in his life. How about he looks at what he has done to end up in the papers? Nazi uniform, anyone? Oh, no. Wait. That was William and Catherine’s fault. Nothing is ever his fault. What a dunderhead. 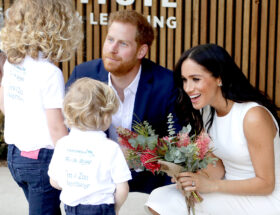