Skip to Content
Home Chronicles of Harkle I’m Too Sexy For Montecito! – A Sussex Satire Did a Man Get Plastic Surgery and C...

Harry was sexy, or so his wife wanted him to think. He was “lustworthy.” The pwife, always the wordsmith, had told their new PR to make him sexually attractive to the public as she believed it would squash all the negative stories. The problem? Their popularity was so low that not even their rich Montecito neighbours cared for them. Not even the talk show host who had made fun of them. Did the prince have to become a hairless cat to get noticed?

He had spent so much time posing in the mirror like a bodybuilder pumped full of steroids that he had convinced himself that he had the same magic and power as his sister-in-law. He wasn’t. With all the glam and pizazz that his wife had told him they had, it was apparent to the outside that even if he were a hairless cat, the world wasn’t enchanted with his “Diana magic.”

In the opposite room, the wife sat at her computer on a video call with several of her sugar followers and her PR team. “So, we need to make the world forget all this shit about the Stepford wife and we need to push the narrative of my husband being sexy.” It was bad enough that they weren’t given coronation invites.

The chief sugar claimed his hands gleefully like he was one of the dimwitted princesses in Shrek The Third. The head of the PR machine nodded, despite knowing the narrative wouldn’t work as the Queen of Montecito had written her history multiple times before. The Sussexes believed throwing tantrums, and their families under the bus would win them sympathetic fans. In a sense, it did, but in the worse people. They wanted to destroy the monarchy. But they were just two people. The world, through their lens didn’t see the toxicity and the trappings the way they did. Unfortunately, though, the wife had only been a royal 18 months before she jumped ship to a house in Montecito, Cali, that they didn’t even like now.

“You are a legit Queen of Montecito, girl!” squealed the head sugar. But, boy, that wasn’t the truth. Everyone in the neighbourhood kept their distance. The wife preached and spoke about her children, but no one had seen them. Keeping the mystery about the kids was the self-appointed queen’s way of keeping herself in the media.

The sugar didn’t know the first thing about royalty. There were four types of sugars.

The change PR didn’t help the fact that Meghan was determined to get her harpies to attack Catherine, Princess of Wales at every turn. She had even dropped that her more popular in-law was a Stepford wife. Again, her lackeys started eating it up even commenting on social media that the future Queen Consort did nothing.

“Girl! You could be dancing Latin on Dancing with the Stars!” swooned the sugar. As much as it played on Meghan’s mind how great she was, she needed to get people’s attention and on her side. While she might have claimed in the press she didn’t care about what the world thought of her, she actually did. Her goal was to get the gullible people of the world to see her as someone who was a victim of the royals when no one else suffered.

What she refused to do was lose her standing with society, regardless of how bad it was. She had been unknown for all of her acting career. All she was known for was stripping off her clothes and for being an entitled diva when she was a nobody. There was nothing sexy about a woman who acted like she had substance when there was nothing to her.

Meghan snapped out of her daze. If there is one thing she needs, it is being The Duchess’. She felt it was her calling, despite saying she didn’t want it, nor did she feel it was important. She changed her mind so often that nothing sense anymore and her followers just went with it. Basically? She had a bunch of people or her version of the men in grey suits. Her late mother-in-law had often called the palace courtiers this and considered them evil.

The PR person didn’t flinch. It isn’t the first time Meghan snaps at him. “We need to do something about your husband before he goes completely hairless.”

The sugar stroked his none existent beard. “Oh! We can use this program called photoshop! We can do mock-ups of Hairless to make him all sexy and pass it off as a real photo. The public is stupid!” He did jazz hands.

Meghan had to do everything in her power not to throw her laptop into the swimming pool. “You idiot! What do you think I have been doing all this time? I have photoshopped H’s hair onto his head so he’s not a hairless freak like his brother, who I actually wanted. I have even taken the liberty of photoshopping picture of the kids we’re supposed to have.”

The sugar went deathly pale. He had failed Meghan on so many levels already. “Montecito’s queen will rule the world!” He then signed off the call, knowing he would get a phone call later. 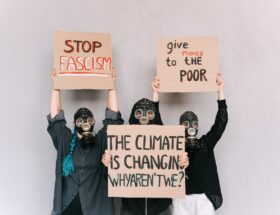